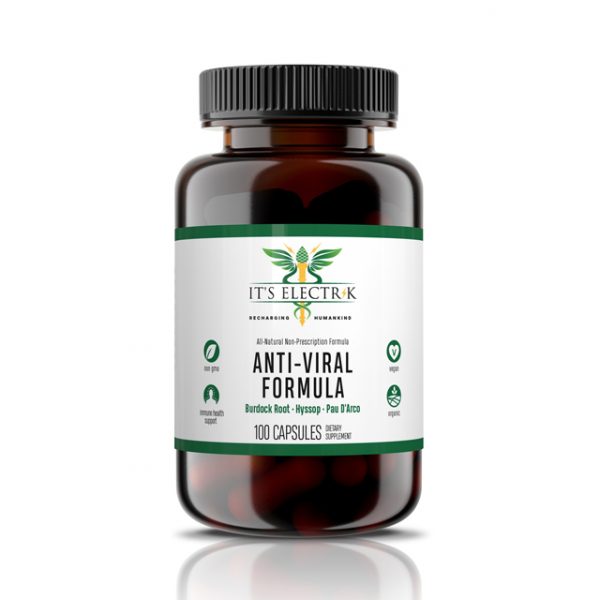 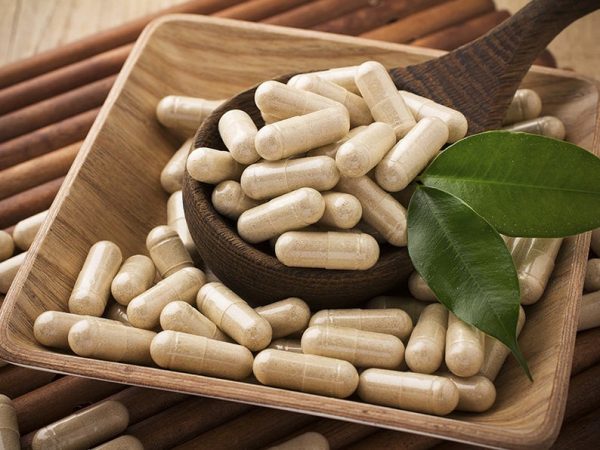 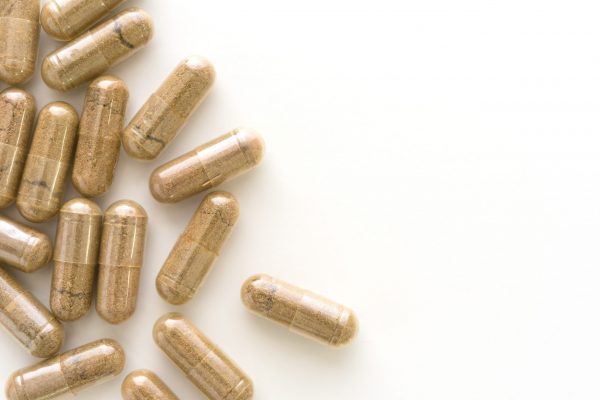 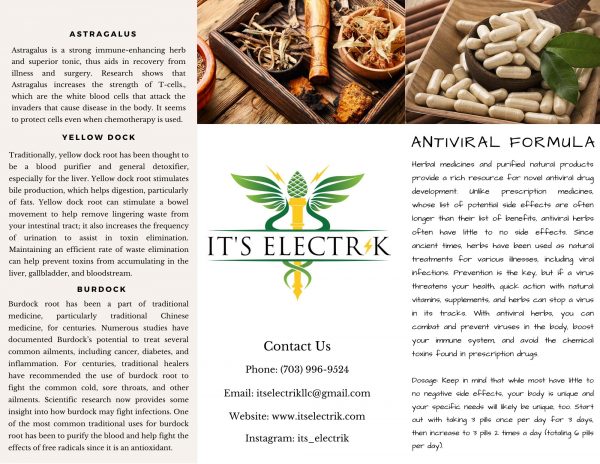 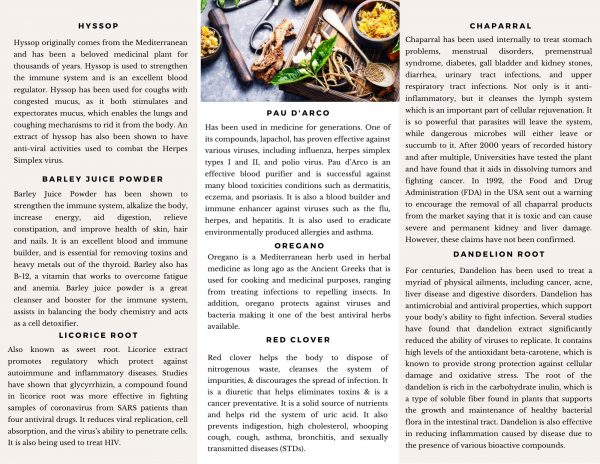 Herbal medicines and purified natural products provide a rich resource for novel antiviral drug development. Unlike prescription medicines, whose list of potential side effects are often longer than their list of benefits, antiviral herbs often have little to no side effects. Since ancient times, herbs have been used as natural treatments for various illnesses, including viral infections. Prevention is the key, but if a virus threatens your health, quick action with natural vitamins, supplements, and herbs can stop that virus in its tracks. By sticking with these antiviral herbs, you can combat and prevent viruses in the body, boost your immune system, and avoid the chemical toxins found in prescription drugs.

*See description section below for list of minerals and herbs*

Milled into a fine powder, these minerals are contained in easy to swallow vegan capsules. Each capsule contains 900mg of natural 100% ingredients. No fillers, additives, chemicals or artificial ingredients.

Hyssop – Originally comes from the Mediterranean and has been a beloved medicinal plant for thousands of years. Hyssop is used to strengthen the immune system and is an excellent blood regulator. For thousands of years hyssop has been used for coughs with congested mucus. It both stimulates mucus and expectorates mucus, which enables the lungs and coughing mechanisms to rid it from the body. An extract of hyssop has been shown to have anti-viral activities used to combat the Herpes Simplex virus.

Oregano – Is a Mediterranean herb used in herbal medicine as long ago as the Ancient Greeks that is used for cooking and medicinal purposes, ranging from treating infections to repelling insects. Oregano is rich in antioxidants, which are compounds that help fight damage from harmful free radicals in the body. In addition, oregano protects against viruses and bacteria making it one of the best antiviral herbs available.

Yellow Dock – traditionally, yellow dock root has been thought to be a blood purifier and general detoxifier, especially for the liver. Yellow dock root stimulates bile production, which helps digestion, particularly of fats. Yellow dock root can stimulate a bowel movement to help remove lingering waste from your intestinal tract; it also increases the frequency of urination to assist in toxin elimination. Maintaining an efficient rate of waste elimination can help prevent toxins from accumulating in the liver, gallbladder, and bloodstream.

Burdock Root – Has been a part of traditional medicine, particularly traditional Chinese medicine, for centuries. Numerous studies have documented Burdock’s potential to treat several common ailments, including cancer, diabetes, and inflammation. For centuries, traditional healers have recommended the use of burdock root to fight the common cold, sore throats, and other ailments. Scientific research now provides some insight into how burdock may fight infections. One of the most common traditional uses for burdock root has been to purify the blood and help fight the effects of free radicals since it is an antioxidant.

Chaparral – Has been used internally to treat stomach problems, menstrual disorders, premenstrual syndrome, diabetes, gall bladder and kidney stones, diarrhea, urinary tract infections, and upper respiratory tract infections. Not only is it anti-inflammatory, but it cleanses the lymph system which is an important part of cellular rejuvenation. It is so powerful that parasites will leave the system, while dangerous microbes will either leave or succumb to it. After 2000 years of recorded history and after multiple, Universities have tested the plant and have found that it aids in dissolving tumors and fighting cancer. In 1992, the Food and Drug Administration (FDA) in the USA sent out a warning to encourage the removal of all chaparral products from the market saying that it is toxic and can cause severe and permanent kidney and liver damage. However, these claims have not been confirmed.

Red Clover – Helps the body to dispose of nitrogenous waste, cleanses the system of impurities, & discourages the spread of infection. It is a diuretic that helps eliminates toxins & is a cancer preventative. It is a solid source of nutrients and helps rid the system of uric acid.is and prevents indigestion, high cholesterol, whooping cough, cough, asthma, bronchitis, and sexually transmitted diseases (STDs).

Dandelion Root – Dandelion are a family of flowering plants that grow in many parts of the world. For centuries, they’ve been used to treat a myriad of physical ailments, including cancer, acne, liver disease and digestive disorders. Research indicates that dandelion has antimicrobial and antiviral properties, which could support your body’s ability to fight infection. Several test-tube studies have found that dandelion extract significantly reduced the ability of viruses to replicate. Dandelion contains high levels of the antioxidant beta-carotene, which is known to provide strong protection against cellular damage and oxidative stress. The root of the dandelion is rich in the carbohydrate inulin, which is a type of soluble fiber found in plants that supports the growth and maintenance of a healthy bacterial flora in your intestinal tract. Dandelion is also effective in reducing inflammation caused by disease due to the presence of various bioactive compounds like polyphenols within the plant.

Licorice Root – Also known as sweet root, and most recognized as a sweetener in candies and beverages, but for centuries people have used licorice root for its medicinal benefits. Licorice extract promoted regulatory T cells in mice, suggesting that licorice can protect against autoimmune and inflammatory diseases. Studies have shown that glycyrrhizin, a compound found in licorice root was more effective in fighting samples of coronavirus from SARS patients than four antiviral drugs. It reduces viral replication, cell absorption, and the virus’s ability to penetrate cells. It is also being used to treat HIV.

Pau D’Arco – Has been used in indigenous medicine for generations. One of its compounds, lapachol, has proven effective against various viruses, including influenza, herpes simplex types I and II, and polio virus. Pau d’Arco is an effective blood purifier and is successful against many blood toxicities conditions such as dermatitis, eczema, and psoriasis. It also is a blood builder and primary immune enhancer against viruses such as the flu, herpes, and hepatitis. It is also used to eradicate environmentally produced allergies and asthma.

Astragalus – Is a strong immune-enhancing herb and superior tonic, thus aids in recovery from illness and surgery. Research shows that Astragalus increases the strength of T-cells., which are the white blood cells that attack the invaders that cause disease in the body. It seems to protect cells even when chemotherapy is used.

Barley Juice Powder – Has been shown to strengthen the immune system, alkalinize the body, increase energy, aid digestion, relieve constipation, and improve health of skin, hair and nails. It is an excellent blood and immune builder, and is essential for removing toxins and heavy metals out of the thyroid. Barley also has B-12, a vitamin that works to overcome fatigue and anemia. Barley juice powder is a great cleanser and booster for the immune system, assists in balancing the body chemistry and acts as a cell detoxifier.

*This product has not been evaluated by the FDA, and is NOT intended to diagnose, treat, cure or prevent any illness or disease. For diagnosis or treatment consult your physician*

Keep in mind that while most herbs and minerals have little to no negative side effects, your body is unique and your specific needs will likely be unique too.

Start out with taking 3 pills once per day for 3 days, then increase to 3 pills 2 times a day (totaling 6 pills). Drink plenty of water). Information brochures are included with all orders.